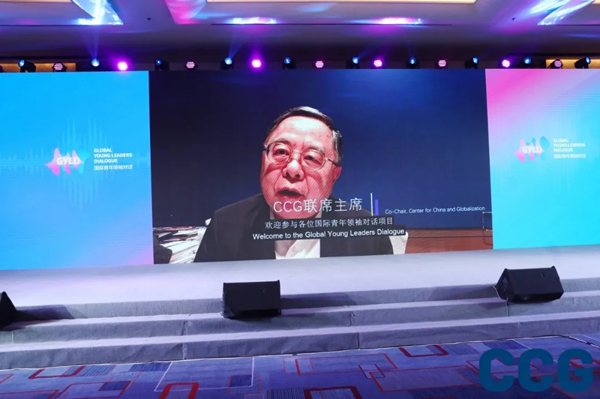 On December 15, 2020, Ronnie C. Chan, co-chair of CCG and chairman of Asia Society Hong Kong Center spoke at the launch of the Global Young Leaders Dialogue (GYLD) Program. The following is an abridged transcript of the speech, which has been edited for length and clarity.

I belong to the baby boomer generation. I consider mine to be the most lucky, but at the same time also the most selfish. Consider this, my generation grew up in the Post-World War II era, when the economy was rising quickly, opportunities abound(ed), jobs was everywhere. If you have a Barchelors degree even better, you never have to worry about jobs. We grew up in an era of abundance of natural resources. Yet we are leaving to your generation a somewhat depleted world. My generation inherited a clean environment, clean air, clean water, clean soil, clean ocean. And yet 70 years later, we leave to you dirty air, dirty water, polluted soil, a heated up ocean, terrible.

My generation grew up, yes, after World War Two, of course there’s a lot of national debt. But because the economy was going fast, quickly, the debt was paid down. And then we begin to accumulate debt. And there’s so much of it now that there’s just no way my generation can ever repay it. So what happened? You pay it. We never even thank you for nor apologize. Let me give you another one. During my generation’s lifetime, for the most part, if you live in the west, everybody believed that the next generation will always be better than our own, and ours is always better than the last generation. That game, I believe, in the west, it’s over. What about China? In the PRC, the first 30 years was pretty bad. The following 40 years was absolutely on the rise. Maybe it will last for another ten, twenty, thirty years. But what’s next?

Consider another thing. Your generation is living at a time when the global situation is greatly changed. My generation, the baby boomers. We lived under Cold War. That was very dangerous, but at least it was relatively stable. And since 1990 with the fall of the Soviet Union, we live in an age of Pax Americana that lasted perhaps 15 years. But now whether you like it or not, it is ending. No one can cut down the Pax Americana. Only the United States itself can. How did they do it well? First of all, they cut down their own moral authority – fiscally irresponsible. And it is said that power corrupts and absolute power corrupts absolutely – we usually apply that to domestic situation which is true. But in the last 30 years or so, we’ve seen it happened in the international arena as well.

Before 1990, for 190 years, the United States was involved in something like one point one military conflicts per year. Since 1990 roughly, it has been engaged in 6.1 per year. Terrible. And then also of course, it is always the case, the wining of any civilization is always coinciding with pride. And so the pride that is exhibited in the last couple of years by the United States is truly amazing. Then finally America decided to pick on a fight that neither side is gonna win. No, it’s impossible for either side, and that is it takes on China in an unnecesary way. Because China as far as I can tell, is very happy to play second fiddle if necessary. So what are we facing? We’re facing a totally fragmented world that will degenerate into chaos. It’s gonna be a messy situation.

Finally, we’re looking at COVID-19, pandemics. In the past, pandemics happened every 5 to 10 years. But now it’s more like every year or two. And most, in the old days it’s always regional, but today it’s international and global. And part of the reason is the rapid urbanization that we’ve been seeing everywhere in the world.

Then you have five other global issues. I will not go into the the details. Number one, technology, technology has done a lot of good things, but it also creates a lot of moral issues. What about standard setting? What about technology driven terrorism? The second global issue is financial crisis. In the past, it is only financial. But in 2008, it almost brought about an economic collapse. I believe the reason, the fundamental reason is that in the west there is a wrong philosophy that to be bigger is better, to be faster is better and to be freer is better. That’s dangerous. It should learn from, perhaps, the Chinese, the way of the medium, the middle way.

The third global issue is the failure of multilateral international organizations, such as the ones started by The Bretton Woods, those institutions are failing. Number four, we’re entering an age of reasoning receding, the receding of the age of reasoning. Many reasons, racial, religions, populism, degenerating democracy, and mental illness has been on the rise. Finally, moral degradation. These are all serious issues that your generation have to face. So I hope that all of you will be able to keep a cool head. Sure, be passionate about good things. Think boldly, think out of the box. But at the same time, don’t get blind sided by the real situation that I’ve tried to describe to you. All I can say is I wish all of you in this young generation all the best, that hopefully, you will be wiser than my generation, more responsible than my generation, that you will be able to pull the world up, instead of my generation, we’d pull it down. All the best to you all.