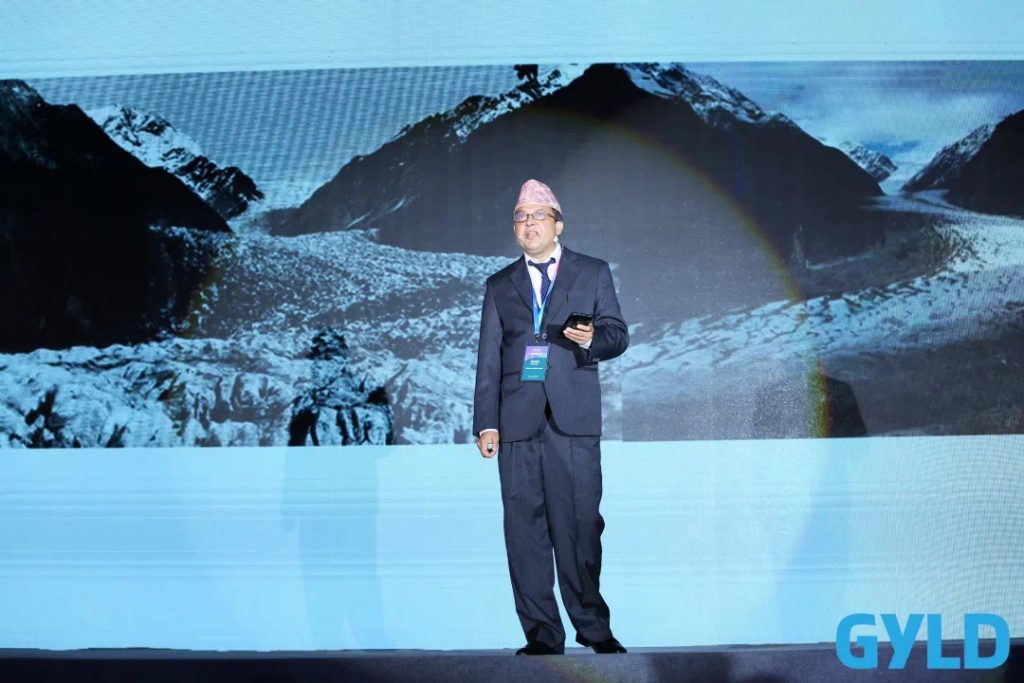 Dambaru Ballab Kattel, Associate professor at the Institute of Tibetan Plateau Research (ITPCAS) of the Chinese Academy of Sciences, delivered a speech at the GYLD Talk during the forum. The following is an abridged transcript of the speech, which has been edited for clarity.

Good morning. I’m greatly honored to be here. And would like to thank both the Center for China and Globalization and the Academy of Contemporary China and World Studies for providing me with this opportunity as a Nepalese young Scientist. This is a historic moment for me, I’m probably power the birthplace of Lord Buddha before expressing my views. I would like to record his message that he delivered to the people first time for about 2600 years ago that is we are arising with our thoughts we make the world.

In recent age that the traits of pandemic, climate change, global warming etc, are trembling the morals of humanity. Improper use of the natural resources has made to human suffering in various ways. As a young climate scientist living in the third pole region, I prefer to talk about climate change and I prefer to talk about the global warming as well as the importance of the region, to the humankind, to the society and to billions of people. Third pole region mainly refers to the unique high mountain region, the center on the Tibetan plateau, which also covers more than 10 South and Central Asian countries.

The cryosphere system in this region is also known as the water tower of Asia. Because it stores more snow and ice than anywhere else in the world outside the Arctic and Antarctic whose name is called  the Third Pole. It is also crucial to emphasize here that the high mountain system in the third pole region influences not only on the South Asian, Asian, or the Northern Hemisphere, but also to the whole world.

In recent decades, the atmospheric warming in this region has been threatening region’s socioeconomic, ecological well-being by destabilizing its hydrological cycle. Extreme weather events, such as the heat waves, cold waves, heavy downpours, and disastrous floods even appear more frequently during the last several years, which influences directly or indirectly on livelihoods of the billions of people who lives in the Asian continent.

These are the common challenges, not only for the people who live in the third pole region, but also for the rest of the world. We are now in the 21st century, science and technology are crucial for our future. While making advances science and technology, we should also focus on transferring our knowledge to serve the society and humankind. In addition, we also have to cooperate to tackle the common challenges. Single effort is not enough to combat the issues, not to resolve the problems and facilitate sustainable development.

Over the last decades, China has not only seen remarkable scientific and technological development, but also been willing to share that knowledge and collaborate with the global scientific community and the common challenges. For example, I’m talking about the Third Pole environment program, an international program initiated by the professor Yao Tandong and other scientists in 2009, which was supported by the Chinese Academy of Sciences.

For the interdisciplinary issues, study of the relationship among water, ice, air ecology and humankind in the Third Pole Region. Our cooperation research relationship, not only between China and Nepal, but also with several countries in Asia, Europe, and United States. TPE’s role is as a platform for scientists who are interested in this unique region.

Hundreds of students, young scholars and scientists from the whole world have been benefiting from this international program. My participations in international corporations could be a representative example that I would like to share with you all to show how important cooperation is to the younger generations. I am happy since when I was a PhD student at the University of Chinese Academy of Sciences in 2009. In building the TPE center in Kathmandu, which over the years has developed into the Kathmandu Center for Research and Education, built jointly by the Chinese Academy of Sciences.

KCRE is also a platform that provides international training courses to the students, young scholars and scientists through the TPE global network. This center also supported many excellent students and young scholars to pursue advanced studying. China many of whom have already published hundreds of outstanding research papers. They also became the backbone of the nation’s science community. We expect the center to grow into a regional resource hub not only of South Asia, but also the countries of Central Asia or even to contribute to the global environmental protection.

I want to record again, the messagesof Lord Buddha, that one moment can change a day and one day can change a life and one life can change the world, as well as that no one save us, but ourselves. Since we, human and any other forms of lives at the beautiful nature. Therefore, it is our responsibility, it is the younger generation’s responsibility to work for the humanity, for the sustainable development and for the peaceful and harmonious world. Indeed, we need to join hands to protect our beautiful planet from the ungraceful degradation. Thank you very much.

Note: The above text is the output of transcribing from an audio recording. It is posted as a reference for the discussion.

【GYLD Talk】Sumayyah Hosany: Overcome the pandemic and make a world a better place