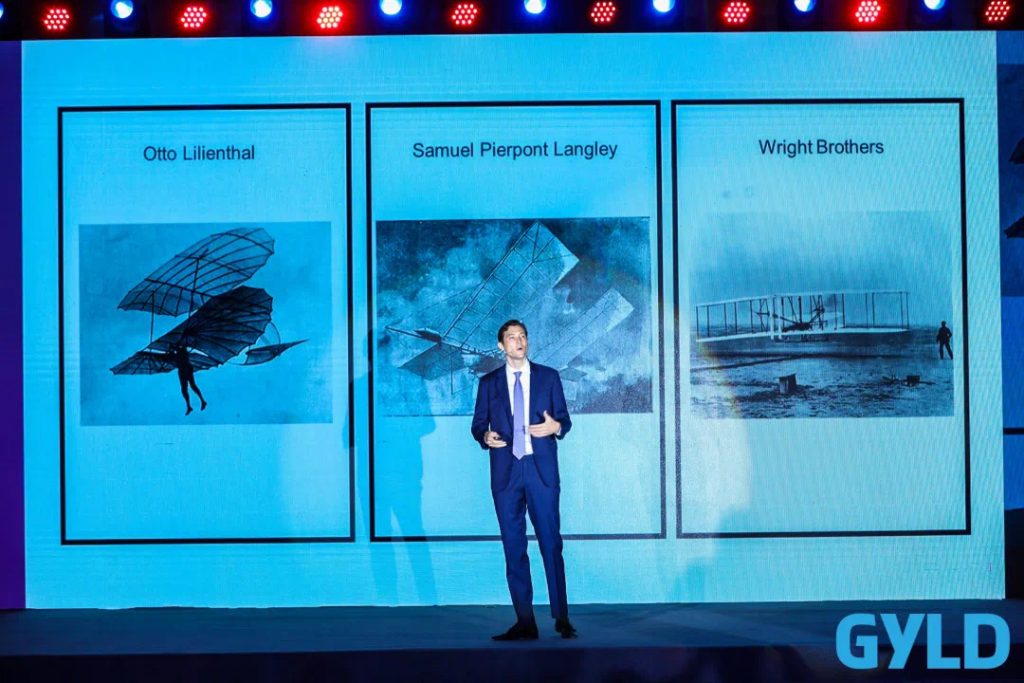 Ben Harburg, Managing Partner at MSA Capital, delivered a speech at the GYLD Talk during the forum. The following is an abridged transcript of the speech, which has been edited for clarity.

As a cross border venture capitalist, I spend my time studying innovation flows and how one innovation builds upon the next, trying to look for sparks across the world and where it might grow and flourish.

The theory of the heroic solo innovator is a farce. Innovators today build on top of each other like a technology stack, just as the Wright Brothers built on innovations that came before them. So too today do innovators across all markets build on each other’s innovations and so we look more at a theme we call co-innovation, cross border co-innovation, which is so critical to the evolution of humanity as we move forward.

The United States and China are constantly locked in a relationship of co-innovation and the innovation pendulum swings back and forth between the two markets. It was the early Chinese whose inventions were ultimately perfected and built upon by American innovators to build highly commercialized and mass-produced businesses. Likewise, now that pendulum is swinging back towards China. And we have the Chinese building upon American Pioneer Technologies, like drones and mass producing them at a much cheaper cost and at a much higher scale than any of their predecessors. This type of innovation continually expands and evolves back and forth.

And today the world is changing drastically. China is no longer a fast follower. It is a benchmark particularly for emerging market an even mature market entrepreneurs, who seek to build on Chinese pioneered and popularized business models in the E-Commerce Social and financial services spaces. Today, when you meet an entrepreneur in Cairo, he’s likely building a product that replicates something he saw in China. So today for instance, Careem, the super app in the Middle East looks much more like Meituan or Didi than it does like Uber.

More critical in this cross-border Co-innovation is the life Sciences and healthcare space. Covid has obviously exposed the need for cross border collaboration and it’s clear that again we cannot build global drugs and global solutions without global partnerships on health. Even things like the American MRNA vaccine built upon exported MRNA nucleotides that came out of China. So, if we’re looking to build global drugs, we have to have global clinical trials, we have to share information cross border and have to be freedom of innovation. That will not occur is we build walls.

We know that rivalries can facilitate great innovation, the space race kicked off great innovation between the United States and Russia and even domestically innovators like Tesla and Edison pushed each other to out innovate and that is ultimately what’s going to be required, not only in the technical but also life sciences spaces.

Beyond health care, of course, collaboration between the United States and Co- Innovation is critical in other areas like environment and stopping environmental degradation and pandemic responses. The problem, though, is that across many markets and particularly in our current America-China Dynamic, local political interests, domestic politics are getting in the way of pragmatic informed constructive collaboration.

So today media outlets and politicians in my home country often create false narratives around the collaboration between the two markets and prevent informed flow of information to their populace is often to the detriment of their people. And so we see media outlets or politicians looking to benefit in terms of corporate earnings clicks or votes rather than critical cross border information flows. The United States cannot bury its head in the ground and pretend that China doesn’t exist or that China is no longer unequal. Today, both countries have to knowledge that the previous state of affairs is no longer relevant and we work together to solve critical crisis together as equals.

When Kissinger came to China about 50 years ago, just a couple weeks ago, we celebrated the anniversary, he mentioned that at the time, obviously China was a beautiful but misunderstood land to Americans. That remains true today in what’s critical to promote that type of dialogue and understanding is cross border exchanges, cross border innovation flows much like we’re having here today. We have to put students, teachers, politicians, business leaders on planes and they have to come back and forth between the markets and understand really the realities on the ground and not the narratives that are being shaped by media and political elites and domestic markets.

Kissinger and Zhou Enlai also understood at the time that what was most important was setting aside domestic political agendas or previous alliances, and that’s what necessitated the secrecy of their first meeting that World Peace was dependent on them co-collaborating even against the previous designs of the political ecosystem. So, today politics should not be something that is driving us apart but bring us together.

My father was one of the pilots that brought Kissinger to China in this 1970s as he worked to open the relationship up with this country and he was certainly walking on the ground trodden by his predecessors like the Flying Tigers. As they put aside politics and worked to co innovate co collaborate and work towards a better shared future by putting politics aside and working on a pragmatic constructive and informed basis. Thanks.

Note: The above text is the output of transcribing from an audio recording. It is posted as a reference for the discussion.