Ambassador of Egypt to China: “use this opportunity, use this initiative” 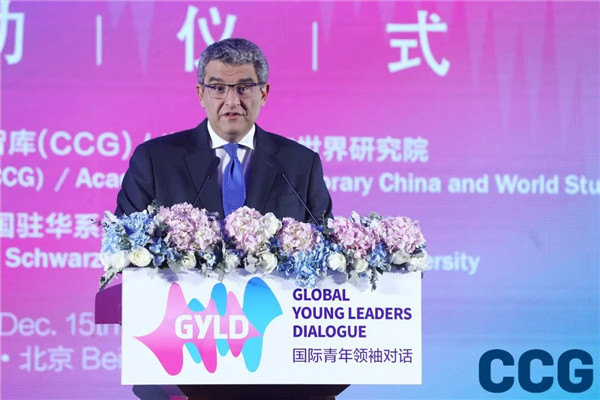 On December 15, 2020, Mohammed Abd El-Sattar Elbadri, Ambassador of Egypt to China spoke at the launch of the Global Young Leaders Dialogue (GYLD) Program. The following is an abridged transcript of the speech, which has been edited for length and clarity.

Thank you very much. Distinguished hosts, honorable Guo Weimin, and honorable Du Zhanyuan, distinguished President of CCG, distinguished ambassadors, colleagues of mine, dear youth, and representatives of youth, ladies and gentlemen, I would like to extend my deepest congratulations to CCG for organizing this event. It is very important, it is a very important initiative, that I think we all have to embrace in the days and months to come.

Ladies and gentlemen let me be very honest with you, history was not kind to women and youth. This is a fact. Seven thousand years into existence and these two have suffered tremendously, even though the writing on the wall said differently. I can give you examples: William Petuna, brilliant politician in the United Kingdom; Alexander the Great, he conquered the world before reaching the age of 30; Napoleon Bonaparte. But let me, because I am the Egyptian ambassador, I would like to stick to my own history. Perhaps, the most important king and pharaoh we ever had was Ahmose I. Ahmose I assumed the kingdom at the age of 10 years, when the northern part of Egypt, the delta, was occupied for 200 or more than 200 years by the Hyksos. And before he was 20 years old, he reorganized the army, threw out the Hyksos from Egypt, and started reforming Egypt. He was a young boy, but he did it. Why? Because he was a leader.

So, the writing was all over the wall, but our ancestors refused to accept it, ladies and gentlemen. This notion is changing, it has been changing ever since the second World War. It started with gender equality, and the process was launched, and then youth, and the empowerment of youth. So, I think that your generation of youth are very lucky, because you are at a certain juncture in history where youth is becoming the epicenter among gender equality. You have a better luck as a generation than those who preceded you for 7 millennia. As the Egyptian ambassador, we came out from Egypt, we came from two revolutions until we were able to rectitude democracy once again. Our president, President Abdel Fattah el-Sisi, focused very much on these two issues, and in particular on the issues of youth. Why? From the age of 15 to the age of 32 this cluster of the population represent nearly 40 percent of the Egyptian population. 40 percent, ladies and gentlemen. This is a number that you have to take very seriously. And therefore, we started a very rigorous program on the issue of youth empowerment.

We started two main programs. The first program was the presidential leadership program, and the second was the World Youth Forum. The first program, what does it do? It is a one year program that targets young leaders and give them the sufficient training, the sufficient exposure, the different modules for them to learn from, incorporate them into the government structure, prepare them, get them ready to aspire, to achieve what they want to achieve. And, it was a very successful program, thousands of them have already graduated from this, and they are taking their place in the government and other structures of the governance of Egypt as a whole. Young leaders are targeted and given and empowered by knowledge, by training, by experience. And all of this is undertaken under the direct supervision of President Abdel Fattah el-Sisi himself.

The second is the World Youth Forum. Upon my return from my post as ambassador to Moscow in 2017, I attended this forum in Sharm El Sheikh, and it was a very magnificent sight. Ladies and gentlemen, we were having close to three-four hundred youths from all over the world, coming together, talking, exchanging, expanding their horizon, expanding the vision. Why? Because, exactly like the previous speakers said, the only way in order to get them ready to assume the leadership they want is you have to expose them, you have to expose them to different culture. The worst thing is to become ethnocentric or cultural centric and become imprisoned by your own visions. This is going to get you nowhere, in the globalized world, this is not the right thing. I have seen the youth, three-four hundred of them sitting, discussing, talking in every aspect, in every aspect that all the distinguished speakers before me talked about. Culture, politics, economics, doing business, developing visions, seeing how diversity can create more opportunity and more unity amongst all of us. I know what it is like, and my President was just in the midst. And, I remember when we ended, when just on the ending ceremony, the three-four hundred ran immediately, they broke all the security protocols and everything, and they ran over the president and they wanted to take a selfie with him. It was very important not only for them, but it was important for the Egyptian leadership to get the feel of the young generation, to get the visions, to understand their aspirations.

Therefore, if you would permit me, distinguished guests, I would like to extend an invitation to CCG, to link up with our two initiatives. We have quite an experience in this, we have been working on these for the last 6 years, and we have struck major success in bridging the age gap and learning from the different initiatives that we have worldwide. So, I am inviting you, please, we would like to coordinate with you, as an embassy, and starting to establish the link; and the more we communicate together on the bilateral, and more than bilateral, multilateral fora, the better we will become.

Ladies and gentlemen, nobody improves by himself, that is a big fallacy. So, I would like to thank CCG for the initiative, I would like to thank you all for this, and believe me, the last words I would like to say for our young leaders present here is that you are way more lucky, your generation is much luckier than our generations. So, make use of it, because you have this opportunity, and if you get an opportunity and you don’t use it, that is a huge mistake, inflicting upon yourselves, you are not inflicting this on nobody else. This mistake, the consequences are inflicted on yourselves. So, use this opportunity, use this initiative, use our initiative in Egypt, our Presidential initiative and the World Youth Forum, and let’s make something better for the youth. Thank you very much.

No, that's the last article

Ambassador of Canada to China:Thinking about operating model is a critical element of effective leadership