Ambassador of Canada to China:Thinking about operating model is a critical element of effective leadership 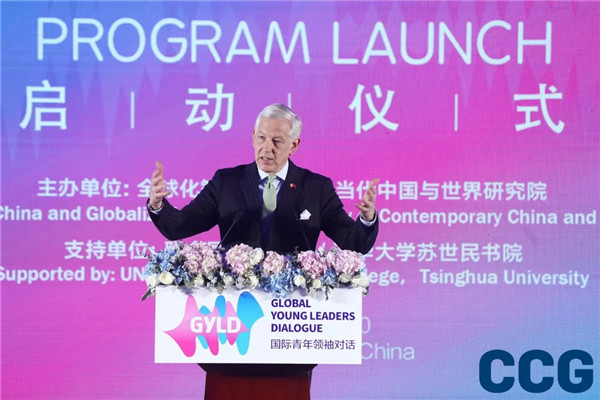 On December 15, 2020, Dominique Barton, Ambassador of Canada to China spoke at the launch of the Global Young Leaders Dialogue (GYLD) Program. The following is an abridged transcript of the speech, which has been edited for length and clarity.

Distinguished guests, fellow ambassadors, and particularly for the young leaders, welcome. It’s an honor to be here today. What I would like to focus on for the next few minutes is talking about what leadership is.

I think, we’ve had wonderful overviews of the need for leadership, given all the changes that are going on in the world. I may draw on my previous experiences when I was in the business world, and I had a rule, which was to me, to meet two leaders a day. I did that for nine years while I was the CEO of my organization. And those leaders were in the public sector, the private sector and the social sector, and today I try to continue that as well, because, there are many leaders here amongst us. What I would ask those leaders is two sets of questions. One is, what are the three things that excite you the most, and the most important question was, what would you teach your younger self, what would you teach your 21-year-old self, if you could do it again. That is the basis of what I would like to cover, because there is a very big difference between management and leadership.

Leadership means that you push the boundaries, you challenge the orthodoxies, you get people to follow a direction, and it means that you will be doing some uncomfortable things to be able to make things differently.

When I think about the three things that I heard leaders most often talk about when they were reflecting on themselves as younger people, it all related to people: they would have removed people faster in their organizations than they did. It doesn’t sound like a very nice thing to say, but that, they would remove people faster. They would have brought younger people up faster into the organization, and that they would have spent more time with people, because people is where it happens. You cannot be a leader if you don’t have people and followers that want to work with you. And then if I try to unpack what it means to spend time with people and what you focus on, there’s a further three things, and I am going to shut up on it. Those three things are really around habits, experiences and apprenticeship. And I think, at least from what I found, because I’m a student of leadership, when I look at leaders, is they typically have a set of clear habits an operating model in terms of how to get things done. These are very basic but many of us forget them, and they come down to things like, do you plan your week ahead, and do you plan your week not in terms of looking at your calendar, but looking at your agenda, what is it that you are trying to get done in your organization over the next five years. If you have more than five, that is probably too many, but what is it you’re trying to get done and how does the following set of activities in the week fit that. Because, for most leaders they can get drowned in issues and activities, and then there’s no time to drive it forward. So, thinking about your operating model, how you organize yourself for the week, how you get time for yourself to be able to think and reflect and move as opposed to just react, is a critical element of effective leadership.

Related to that, is frankly being an interesting person. Most of the most impressive leaders I have met are actually interesting people. They don’t work all the time, they are involved in their communities, they have hobbies, they are interesting. If all you do is work, you are not going to be very interesting and people are not going to want to work with you and as you drive thing through. Thinking about your ability to manage your energy. I think when you are a leader, it’s not about time management, it’s about energy management. There is just never enough time. So, thinking about in the course of the week are there things that are giving you a source of energy, and what is draining you on the energy side, but thinking about your energy and fitness. There is a lot to do with the operating model of how one works as a leader.

Then when I think about experiences, those leaders that have grown the fastest, typically it’s because they’ve had multiple different leadership experiences. That’s important, you don’t all of a sudden become a leader overnight, you do not become a leader when you are appointed CEO or leader of your organization. You are building that up all the way through. And so, looking for experiences where you can actually take something, own it, and be able to deliver working with other people, no matter how small it is, is critical in what you are doing. Getting international experience is fundamental. From a personal point of view, I learned the most whenever I moved somewhere, and my mentors, and I am going to come to this at the very end, then on apprenticeship were mainly Asian leaders: Korean bankers, Korean government leaders, Shanghai mayors, party secretaries, Singaporean leaders. These are people that when you work with them, you’re going to learn a whole different view of how they see the world and how it works and getting those international experiences as early as possible is critical. So, all I want to say is that leadership is critical, we’ve seen it from the previous conversations, how you do leadership is a pretty fundamental challenge and I think I would urge all of us to study that, so that we can all be the most effective leaders that we can be. And, I want to say a special thank you to CCG, to you, Henry and, you, Mabel, for establishing this forum. That in itself is an act of leadership. Thank you very much.

Ambassador of Egypt to China: “use this opportunity, use this initiative”