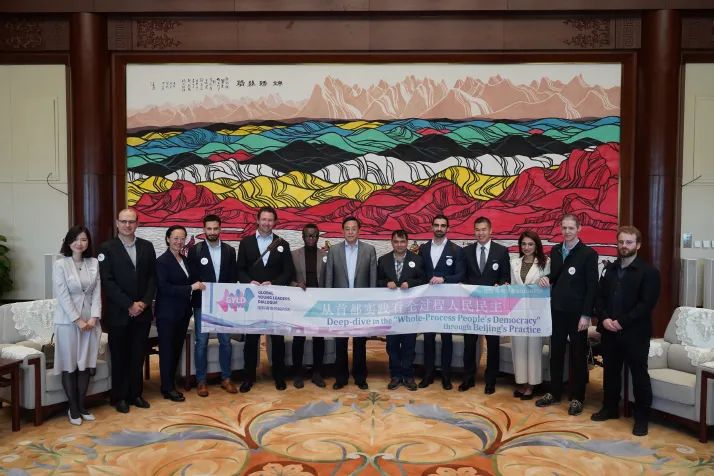 International young people pose for a group photo while visiting the Beijing Municipal Committee of the Chinese People’s Political Consultative Conference on April 15.

As a member of the Revolutionary Committee of the Chinese Kuomintang, Tang Kun, a professor at the Vanke School of Public Health with Tsinghua University, believes he has a channel to voice his concerns and commendations regarding China’s political decision-making process.

In 2019, he was commissioned by his party, one of the eight other political parties on the Chinese mainland in addition to the Communist Party of China (CPC), to head a research project on enhancing the participation of China’s next generation in global governance. Tang was able to conduct focused group discussions with different government departments and officials to determine the existing gaps and demands.

As the project came to its conclusion, he led the team to draft a proposal on how to lift young people’s participation in global governance. His party’s central committee subsequently submitted it to the 2020 annual session of the National Committee of the Chinese People’s Political Consultative Conference (CPPCC), the country’s top political advisory body.

“I feel privileged to be able to contribute to the country’s decision-making and really inspire the government,” Tang said in conversation with global youth participating in a field research program in the Chinese capital on April 15. The group further spoke with political advisors and members of different political parties to learn more about China’s whole-process people’s democracy.

The daylong activity included a visit to the CPPCC Beijing Municipal Committee and a tour of the Beijing Non-CPC Political Parties and People’s Organizations Building. They also viewed historical exhibits about the CPPCC and non-CPC parties to familiarize themselves with China’s multiparty cooperation and political consultation system under CPC leadership.

“How do the voices of the Chinese people reach the CPPCC?” Joshua Dominick, founder and organizer of nonprofit organization Krankin’ thru China, asked.

The CPPCC is an important institution for CPC-led multiparty cooperation and political consultation, bringing together representatives from all political parties, people’s organizations, ethnic groups and social sectors. “They are in touch with people from all layers of society and can fully reflect their opinions, demands, critiques and suggestions so as to achieve the orderly political participation of all citizens,” Yang Qingbai, a member of the CPPCC Beijing Municipal Committee, replied.

“How can advisor suggestions contribute to government decisions?” Dambaru Kattel, a Nepalese scientist with the University of Chinese Academy of Sciences, inquired.Zang Likun, another member of the CPPCC Beijing Municipal Committee, explained that CPPCC members can engage in political consultations. They carry out their duties through mechanisms such as meetings, forums on specific subjects, and consultative seminars. On a regular basis, they draft proposals, undertake inspection tours, conduct field surveys, and report on social conditions and public opinions.Dominick said that to his knowledge, “the consultative purpose of the CPPCC is to bring primary-level information to the CPC in order for the latter to make decisions,” following the dialogue.

Members of non-CPC political parties not only participate in national governance by submitting their proposals, but also directly hold posts in government organs at all levels. “What surprises me most is that China’s political parties are allies and partners, not competitors,” Zoon Ahmed Khan, a Pakistani researcher with the Belt and Road Strategy Institute at Tsinghua University, said. China’s political party system is not a system of one-party rule, according to the white paper China: Democracy That Works, released in 2021. Nor is it one in which multiple parties vie for power and take turns governing the country. It is a multiparty cooperation system in which the CPC exercises state power.

“One of the most fascinating things for me is that they all feel a sense of purpose,” Khan added. “Being able to participate in that process is just immensely gratifying for them. It lends a continuous sense of direction and recognition, maybe even of ambition.”

Zang said she hopes the visitors can immerse themselves in the CPPCC development process, gain a better grasp of China’s political system and share their tour experiences with friends.

The idea of public consultations, of asking the people to express themselves, to share their opinions and views about what could and should be done, to have the opportunity to participate in and contribute to the administration of state affairs, marks an effective way to advance democracy, according to Rafael Henrique Zerbetto, a Brazilian representative on the tour.

Outside the Chinese borders, many believe China has no democracy whatsoever, Jonathan Lopez, a dual citizen of Colombia and Canada, said. “What we saw today is that there is a lot of collaboration, with different parties and people able to create and hand in their proposals. This makes the people’s voices heard.”

Dominick echoed Lopez, adding that these types of tour activities are important because many times people’s misconceptions of China may lead to greater misunderstandings. “If they were to receive an introduction to how things actually work, like we did today, I think that would be very helpful,” he said.

The event was part of a program called Global Young Leaders Dialogue (GYLD), launched by the Center for China and Globalization, a Beijing-based think tank, and the Academy of Contemporary China and World Studies in affiliation with China International Communications Group. The program intends to promote dialogue and communication among young people from different countries.

Mabel Lu Miao, Founder and Secretary-General of the GYLD program, said China’s governance model and the logic behind its development have generated worldwide curiosity.

“The best way to learn more about a place is to actually go there and talk to the people face to face,” she said, adding the activity could help them better understand the nation and its democratic form.

“I learned a bit more about how it really works, not just as a concept, but in practical terms,” Khan said, calling for similar activities in the future. “We need deeper interaction, and I honestly hope this type of dialogue can continue.”

GYLD calls for wisdom and power of youth for global development